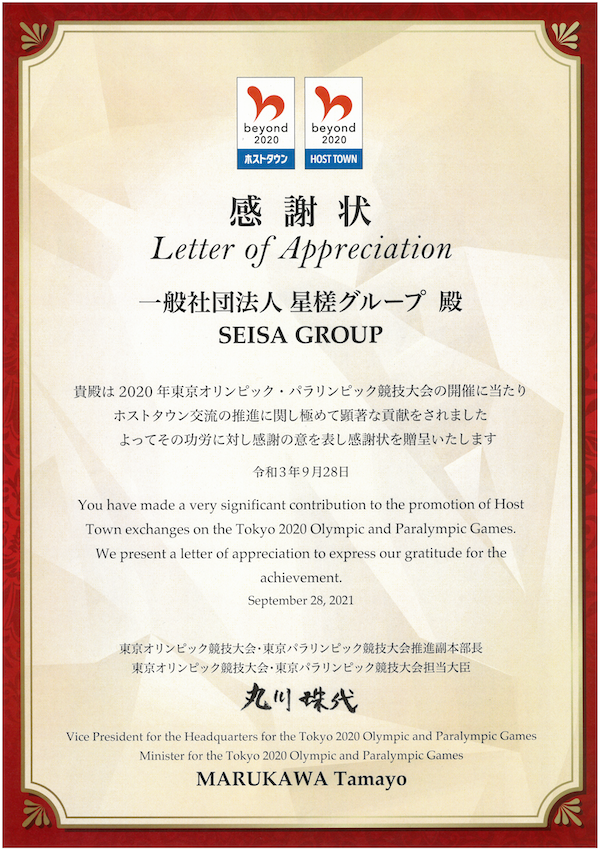 The purpose of the "Host Town" program is to promote exchanges between Japanese local governments and residents of countries and regions participating in the Tokyo 2020 Olympic and Paralympic Games in various fields such as sports, culture and economics, in order to revitalize local communities and realize long-lasting exchanges beyond the Tokyo Games.

SEISA has been working with Kanagawa Prefecture, Odawara City, Hakone Town and Oiso Town for 49 years to promote the "SKY Project", a host town project aimed at accelerating the realization of a "KYOSEI" - Living Together in Harmony.

In addition to providing an environment for young athletes from Bhutan and other countries to study sports at SEISA high schools and universities, we also provide opportunities for children to learn about the "Heart of Japan" and the "Spirit of KYOSEI" when they return to their hometowns. We will continue to create various situations for children.

Furthermore, for this year's Olympic and Paralympic Games, we welcomed Bhutanese Olympians and Paralympic athletes to our SEISA Hakone Campus for a pre-training Olympics and Paralympics camp. In the midst of the confusion and anxiety caused by the COVID-19, we worked together with junior and senior high school students to provide a warm welcome to the athletes, and in particular supported the Kingdom of Bhutan in their first appearance at the Paralympic Games.

Not only at the Tokyo 2020 Games, but also in the future, SEISA will continue to work towards the realization of KYOSEI (Three Guiding Principles: Understand Each Other, Leave Nobody Out, and Make Friends).